Words from our founder James M. Fedora about the unique medical needs and events leading to the founding of Operation Hammond

No organization formally existed that could effectively organize members of the fan community to offer social and medical care in a pop culture setting, all while operating within local, state and national laws. The idea and concept of Operation Hammond were conceived in early 2012.

Below I have enumerated examples of medical emergencies from conventions large and small, that I have witnessed or assisted with while on convention staff since 2008 (when I became an EMT). This is in addition to my normal non-medical staff job during the conventions. These are only a few of the many experiences I have had. For liability and privacy reasons, I cannot name the events or provide specifics about each example.

2008: Person broke their finger, person passed out in a bathroom, person fell and hit their head, person with dehydration emergency, person was stabbed in a bar fight next door to the hotel and walked into con HQ for help, person with uncontrollable bloody nose, and many people with sprained and twisted ankles.

2009: Person had a seizure, person had a mental breakdown/psychotic episode, person passed out drunk in the bathroom, person with a fractured hand, person had a dehydration emergency/fainting spell, person dropped a large metal chair on their foot, person twisted their ankle on the hotel’s steps and unresponsive person in a hotel room.

2010: Drunk person fell on stairs, person got hit in the head while dancing, person passed out drunk on floor, person passed out with dehydration/heat stroke emergency, person had trouble walking with weakness due to flu-like symptoms, person had a violent panic attack, fire alarm went off in the convention center causing all 30,000 attendees to evacuate, unresponsive diabetic that turned combative when EMTs attempted to help the person, and an unresponsive person in hotel common area due to possible drug use. 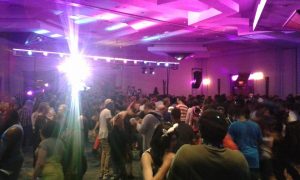 2011: Person fell down a flight of stairs after taking illicit drugs, dehydrated person who could not walk and was weak, person broke his ankle unloading a truck, person cut their wrist after an emotional confrontation with their significant other, person was assaulted and beat up outside of the convention center by an unknown assailant and required immediate medical attention, person had a seizure in the dance and was found unresponsive, person popped their knee cap out of place while dancing. I came across a serious car rollover crash on the way to a convention. The person had a serious head injury and required immediate medical care, and a person had a urgent case of supraventricular tachycardia (fast heart beat that would not slow down).

Please keep in mind before I was chairman of Operation Hammond I didn’t always staff a convention from an EMT or medical standpoint. However most of my convention colleagues are aware that I am an EMT, which prompts them to call me for many medical emergencies. For a very long time, at many events and conventions I was performing EMT/First Aid duties in addition to my normal staff position. I complied with these requests independently for a long time. Eventually it became clear to me, as well as others, that something needed to be done. Further action and organization was required. I came to the conclusion that most conventions are ill-equipped to deal with the unique medical and social issues that surround the pop culture fandom. These events are all too often completely lacking any formal plan for emergent situations. Furthermore, those events and conventions with plans in place often skirt the edge of legality and/or rely on a loose network of staffers that may or may not have medical training or the proper skills needed to effectively deal with the full social and medical needs of attendees.

Of all the conventions I have staffed or attended since becoming an EMT (2008), only two included medical departments. I have been staffing and attending fan conventions since 2003, and as an attendee, if I had been aware of a convention medical department I would have utilized it many times. Even fewer had the proper medical services needed to serve the large numbers of people and unique medical needs presented at a fan or pop culture convention.

There is a clear and pressing need for an organization equipped to provide this crucial service for pop culture and fan conventions. Operation Hammond aims to fill this gap and do it legally and

within the scope of practice laid out by national, state and local laws. Operation Hammond has the proper experience and right personnel with the right knowledge in place to embark on this novel and unique mission. To the best of our knowledge, after extensive research, we are the only organization attempting this brand of work within the scope and practice of state, federal and local laws as a nonprofit organization.

We have the proper insurance and logistical resources and equipment to ensure we are able to provide care at the American Red Cross First Aid level. This ensures that Operation Hammond can both treat ailments/injuries, have the needed medical skills to recognize chronic & emergent medical conditions in the community and conventions/events we serve. This includes situations that require immediate care and transport to a hospital. Many times, as an EMT I have seen medical issues go unrecognized or untreated due to a lack of proper medical training from staff and bystanders when at conventions and events.

Thank you for taking the time to find out more about Operation Hammond. This organization is something very near and dear to me and it’s something that has never been done before. I know that with hard work and the right people we will spread our concept around the world. We may be small now, but we continue to grow every day. Thank you for investing the time to read this document. If you have any questions, please contact us and we will be happy to answer any questions you have.

Do NOT follow this link or you will be banned from the site!